Silvan in the Sabi Sand is a thriving hub of life. It dazzles with a wide variety of species and the sheer number of animals calling the reserve home. Our guests are often in awe that they can all co-exist and that competition for food isn’t more of an issue. However, the subtle balance of browsers that call Silvan home is a fascinating example of how well this thriving ecosystem functions.

In the case of herbivores, in particular, it seems like a miracle that there’s still any vegetation left to eat at all, given the number of animals that rely on it for survival. However, the balance between each of the various browser species is the perfect example of nature’s harmony in the Sabi Sand. 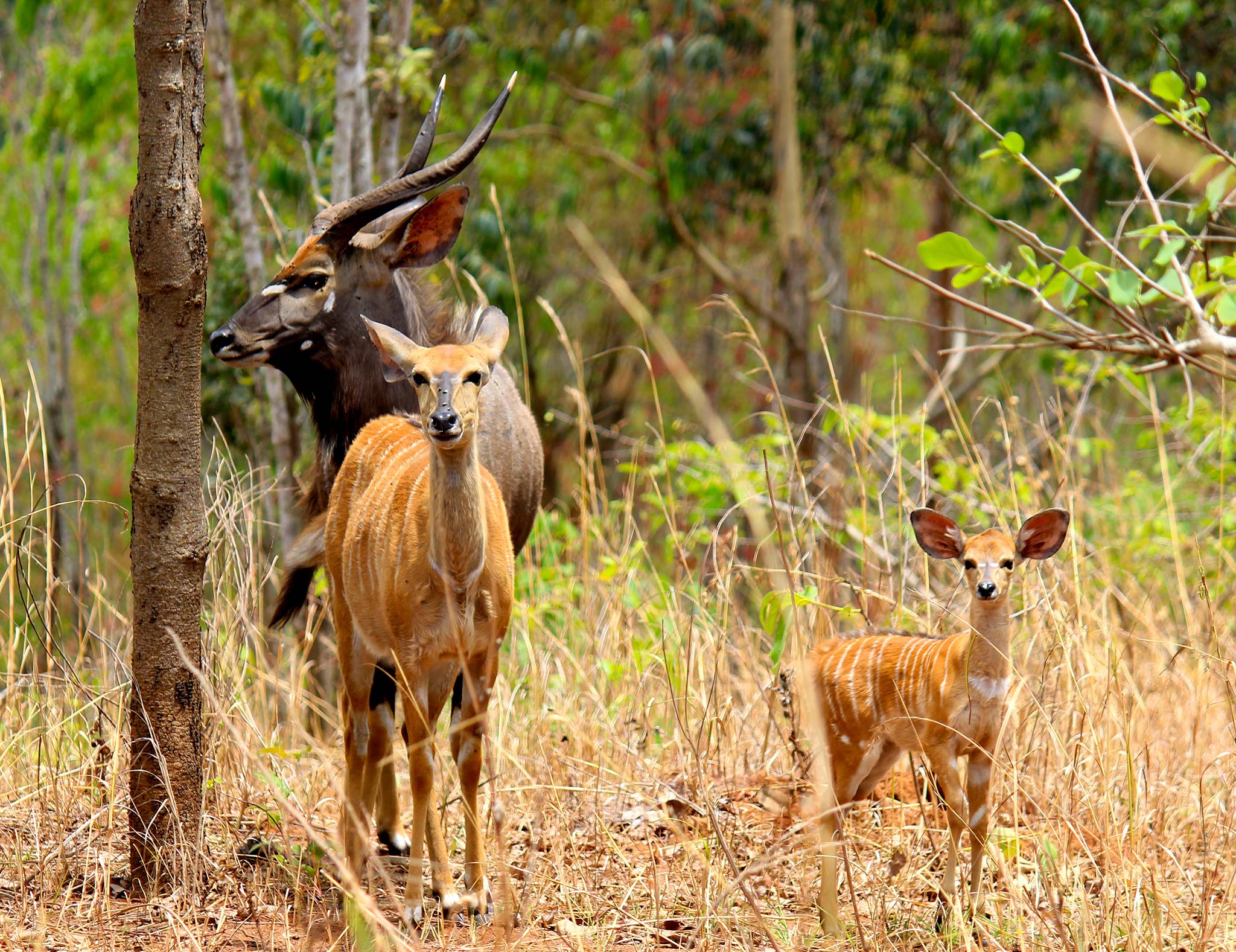 Nyala are among the more regular visitors to the lodge, Image Credit: Stevan Loffler

The nyala is the antelope you’re most likely to see close to the lodge. These usually-shy antelope are among Silvan’s most beautiful residents. The males are some of the most striking antelopes, with twisted horns, shaggy beards and beautiful stripes complementing a dark brown and slate-grey coat.

The ladies are somewhat subtle by comparison, sharing the stripes of their male counterparts but set against a rich rusty or rufous-brown coat. They gather in small herds of between two and ten and feed predominantly on foliage, fruits, flowers and twigs. In fact, nyala herds will often follow troops of baboons or monkeys to eat the fruit dropped from the trees. 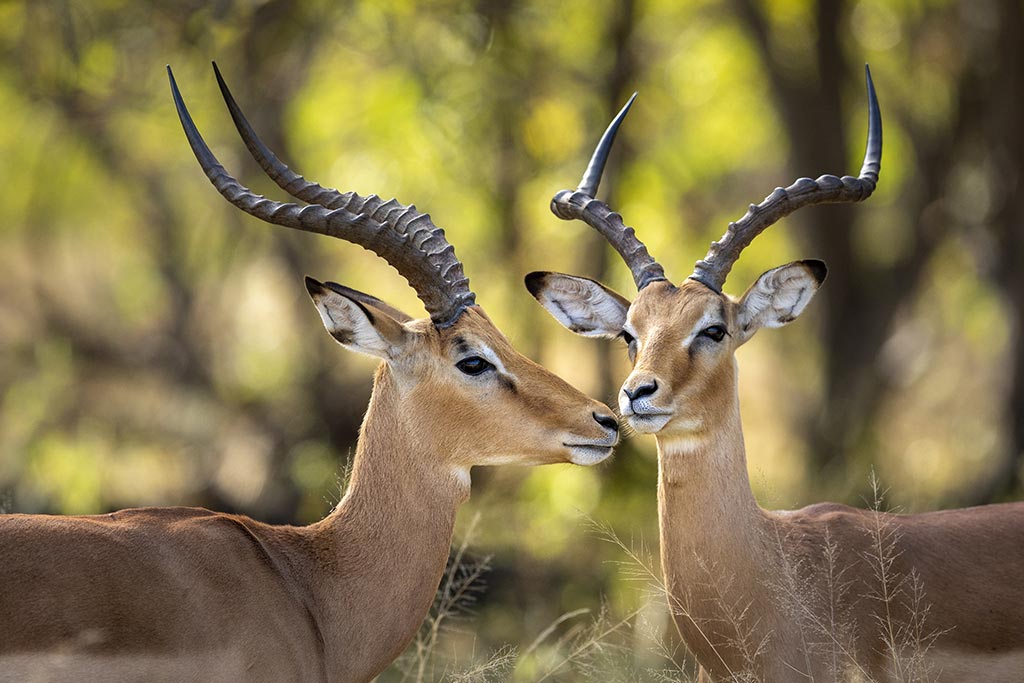 The impala is a common sight at Silvan Safari

The impala is by far the Sabi Sand and Kruger region’s most numerous animal species. And the latest census data from 2011 indicated that there were an estimated 180,000 impalas in the Kruger alone.

The impala is more common in less dense vegetation, favouring the bushveld habitat in the Sabi Sand rather than the dense thickets preferred by their smaller cousins, the nyala and bushbuck. They gather in large herds, with as many as 50 not uncommon. 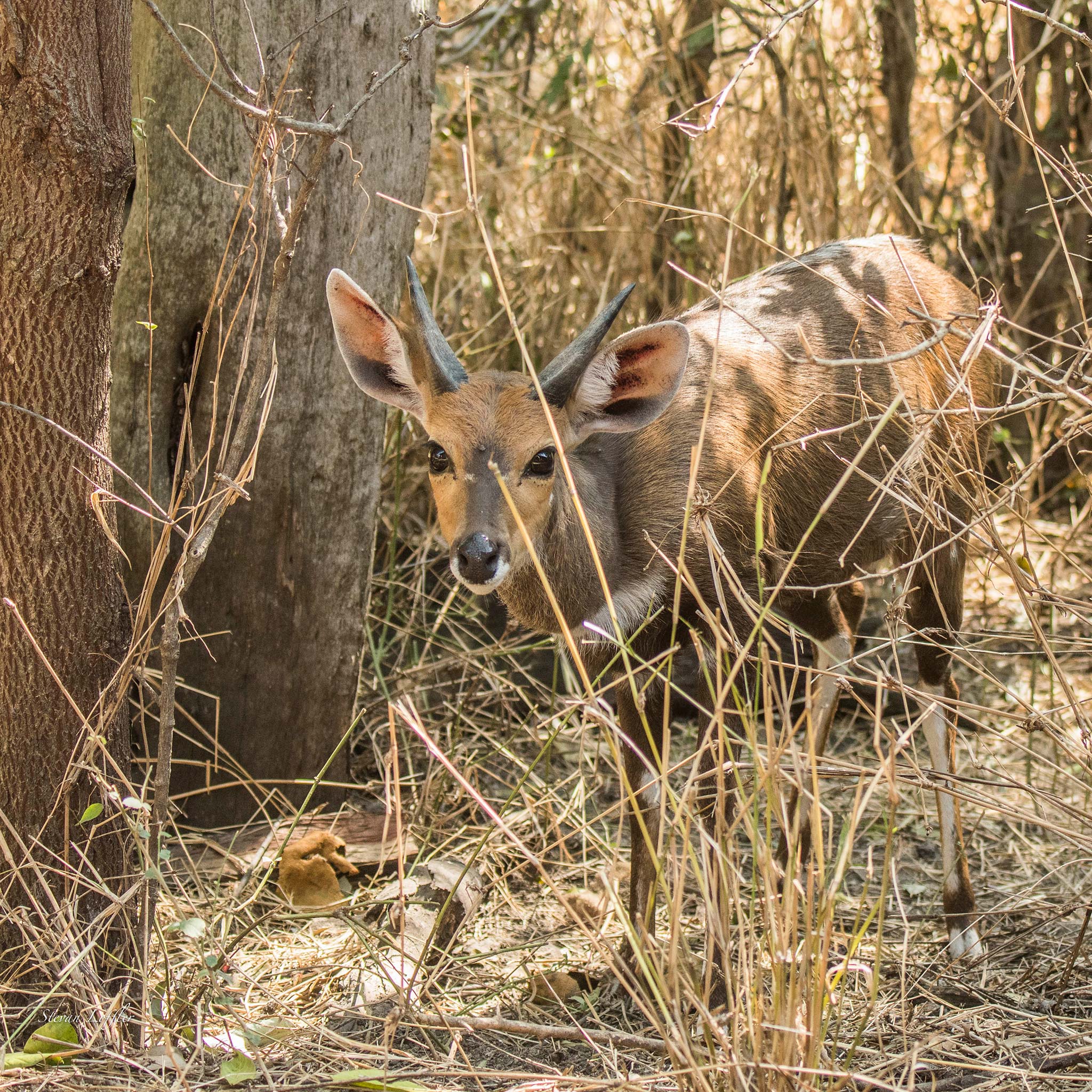 The bushbuck is often confused with the slightly larger nyala (particularly the females). Like the nyala, it’s an antelope species most commonly found in the more densely vegetated habitats at Silvan. Rather than the stripes of the nyala, it has a varying number of white spots and a white “collar”.

The males have very similar markings to females but have a set of short, twisted horns. These shy creatures are predominantly solitary. They tend to frequent riverine bush and dense thickets, which act as cover and form their primary food source. 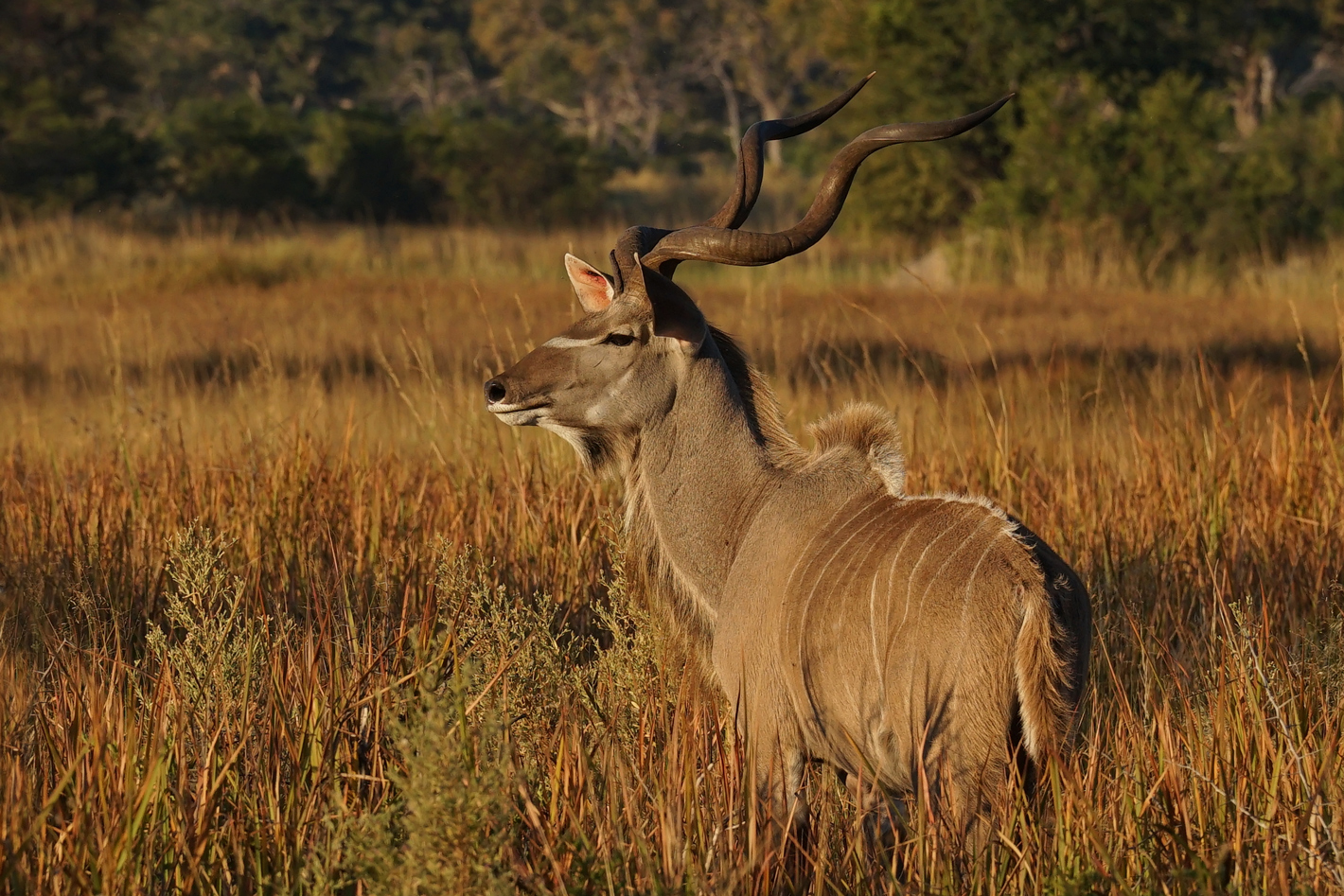 A fully grown male kudu is one of the most stunning sights the Sabi Sand has to offer.

The stately and regal kudu is among our favourite sightings at Silvan. The almost comically large ears are a giveaway, as they often turn to look at an approaching vehicle. Like the nyala, the males are the real winners in the beauty contest, with the most spectacular horns of all antelope species, shaggy beards and pronounced shoulder humps all prominent.

Standing at a shoulder height of between 100 and 160cm, the kudu is considerably larger than other browser species in the region. This means that they can reach different branches and feed on more types of vegetation compared to their smaller cousins. And this comes in handy when you share your buffet with an army of hungry impala! They are also found in smaller herds than their prevalent cousins, usually consisting of between six and ten. 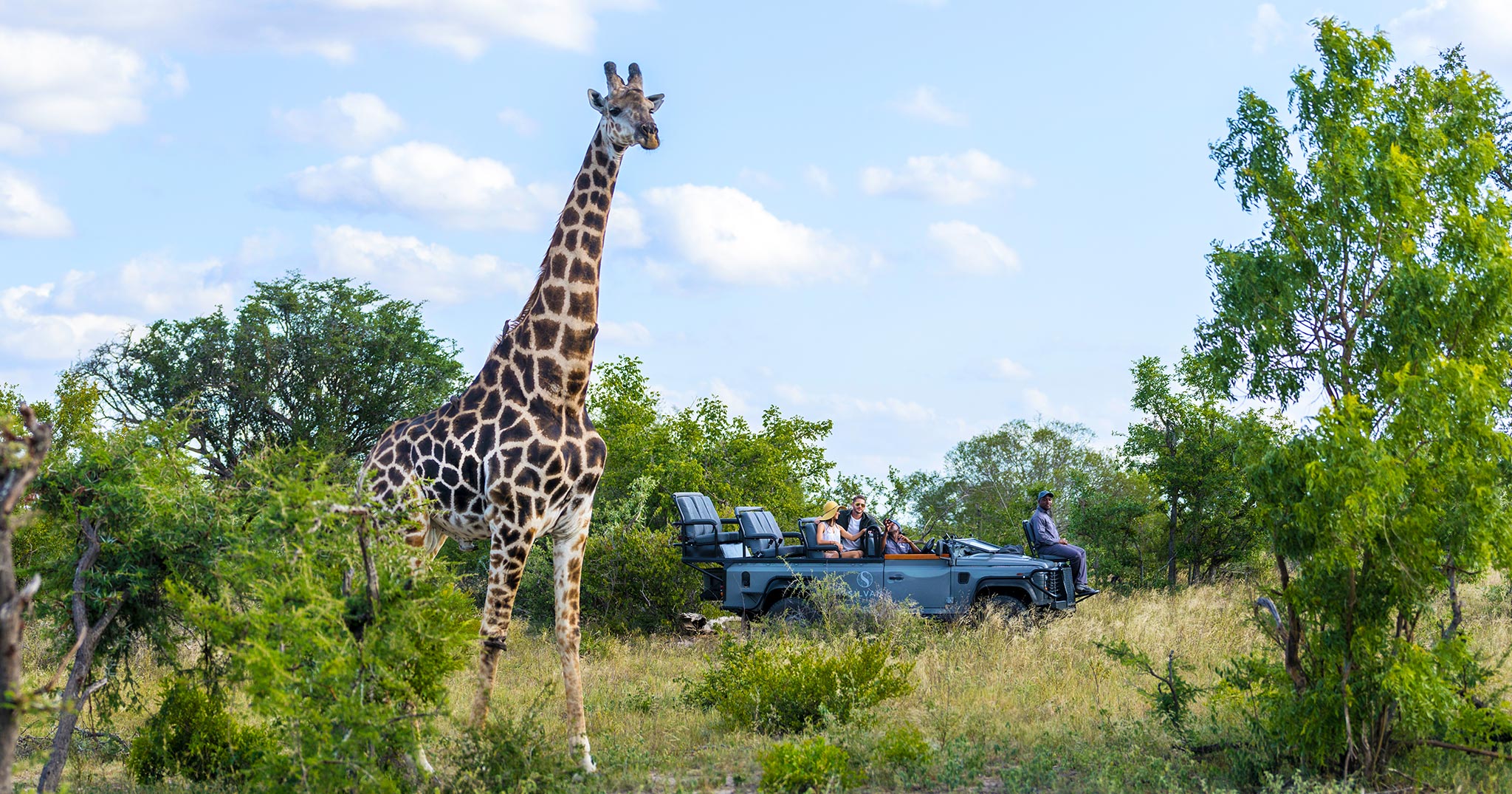 Giraffes tower above the bushes and trees, making them easy to spot from afar

Whilst they may seem out of place on this list among all the antelope species, the giraffe is an essential browser in the Sabi Sand. Thanks to their height, giraffes have little competition for food. And they get to enjoy exclusive access to treetops and the freshest branches.

As you might imagine, it takes a fair bit of fuel to keep a body of that size moving! In fact, up to 34 kilograms of foliage per day! As a result, a tower of giraffes is comparatively small compared to other browsing species, with groups of between three and six being the norm.

Balance of the Browsers in the Silvan Bushveld 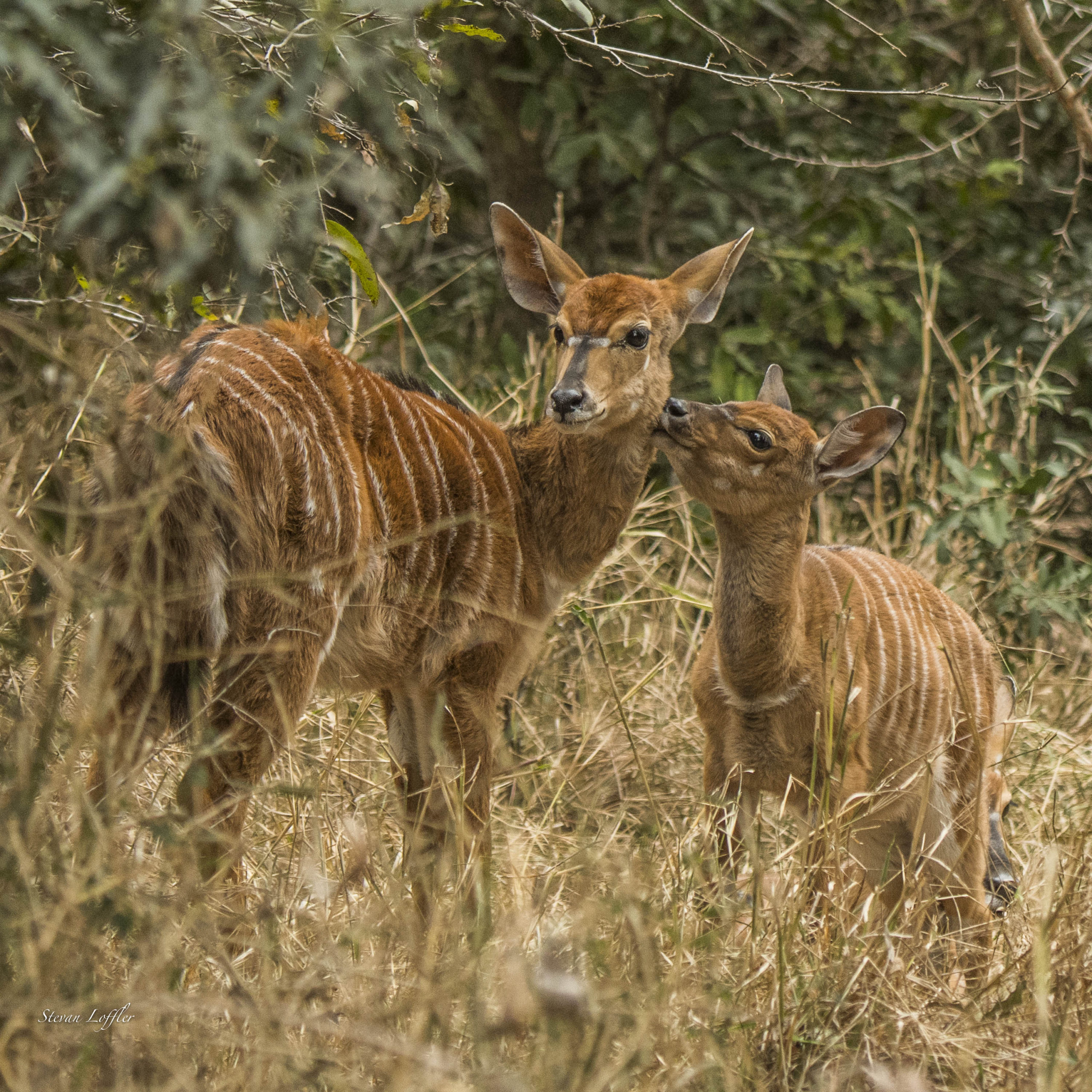 With each browser above, you may have noticed how there are subtle differences in habitats, habits, group sizes, and even the size of the animals themselves. These differences all complement each other to ensure that competition for food between them is minimal.

For example, whilst the kudu, impala and giraffe all share the same habitat, their size means that they do not compete with each other. Similarly, whilst the nyala and bushbuck share a habitat and are of a similar size, neither congregates in groups large enough to make sharing food resources unsustainable for the other species.

Bear witness to the balance of browsers at Silvan

Everything we do at Silvan is centred around an approach that honours the intricate manner in which all life is connected. Seeing this subtle and delicate balance of browsers and all lifeforms each day is a constant reminder to celebrate and admire it. Finding our place and role within this ecosystem and ensuring that we play our part in protecting, conserving and allowing it to thrive in all ways possible drives us each day.

We can’t wait to welcome you to Silvan soon! Contact Rhino Africa’s Travel Experts to make it happen.

More from the Silvan Blog