Somizi is one proud friend. The star recently headed to his social media pages to gush over some of his celeb friends who have successfully ventured into the alcohol business.

Many celebrities have left the norm of relying on one source of income. Instead, stars have branched out to other business avenues such as clothing, cryptocurrency, perfumes, makeup and alcohol. 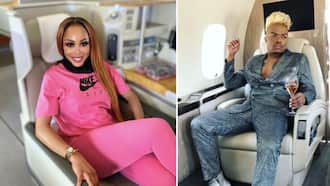 Somizi Mhlongo comes through for Khanyi Mbau during rough patch on New Year’s Eve: “She won’t spend it alone”

“So Kelly’s alcohol is the only one that gets the job done?”

Somizi Mhlongo comes through for Khanyi Mbau during rough patch on New Year’s Eve: “She won’t spend it alone” Somizi has Mzansi laughing with his ‘tinned fish’ midnight snack, fans share their own weird cravings

Still on Somizi Mhlongo, Briefly News previously reported that the star revealed that he came through for his friend and fellow celebrity, Khanyi Mbau. SomG shared that he booked a flight for the actress to fly to Cape Town because she was dealing with a lot.

According to the details shared by the larger-than-life media personality in the latest episode of his reality television show Living The Dream With Somizi, the incident took place on New Year’s Eve.

The South African reports that the Young, Rich, and African star called SomG in tears, telling him that she was supposed to book a private jet to the Mother City, but it was not booked.