Salima Mukansanga wanted to become a professional basketball player as a young girl. But she was told that she was not old enough to be a part of an U17 national side and to wait. So, she turned to football.

“I was 15 years old and I was told ‘you’re still young, maybe you’ll get a chance in another two years.’ So, I tried football. I’d never played football. But I said let me focus on something else,” Mukansanga tells DW.

On January 18, Mukansanga took charge of the group stage game between Guinea and Zimbabwe at the Ahmadou Ahidjo Stadium in Yaounde.

She looked confident and radiated poise and control in a game that ended 2-1 in favor of the Zimbabweans. For good measure, she issued six yellow cards, including one to Guinea’s star player, Liverpool midfielder Naby Keita. It was all in a day’s work.

“After the game my colleagues were laughing, it got emotional then I cried in the locker room. I was really happy, very happy and excited because my dream came true,” she says.

As well as the Women’s World Cup, Mukansanga had previously officiated at the 2020 Olympic Games Women’s Football Event and the 2016 Africa Women’s Cup of Nations. She had officiated men’s league games back in  Rwanda, but there was extra scrutiny in Cameroon.

Referees have to pass stringent fitness tests and have current knowledge of the game because they are selected based on their experience, skills and form.

Just days before Mukansanga’s debut, the Zambian referee Janny Sikzwe had twice brought an early end to the game between Mali and Tunisia. It later emerged that he had suffered from sunstroke. Alongside the VAR decisions, referees were under pressure to deliver.

“I tried to manage the pressure,” she says. “I had my colleagues around me, the people who appointed me. They kept saying: ‘forget the pressure, make it a perfect game and show the rest of the world that you are ready so that the women watching you can say, yes, she made it because she was confident of herself, she made decisions according to the laws of the game and she delivered what she had.'”

“I tried to manage the pressure”

Her country’s hero, an icon for girls

After officiating one game, Mukansanga, 33, has returned to her country an icon following her turn in Cameroon.

In an editorial, The New Times, one of Rwanda’s leading newspapers, wrote that her “steady rise to the continent’s biggest football stage is a beautiful story of a girl who refused to be defined and held back by stereotypes and other gender barriers, but instead firmly kept her eyes on the ball.”

She is grateful for the support she has received.

“I am a lucky woman,” she tells DW. “I come from a country that gives equal chances to women to do what they want which benefits them according to their ability and commitment. That’s something that pushed me to be more active and to work hard on my career.”

She hopes that her journey can light the path for women around the world who want to make forays into professional football.

“I am a woman, I am ready and I am capable because I worked hard for my career. I give all I have, I make a lot of sacrifices because I love it.

“All that support gives you strength to keep working and focus for the future. This is a moment for [women] to work, focus on your dream, hard work, sacrifice, you will get a chance. Once you get this chance, it is in your hands, focus and work for the future.” 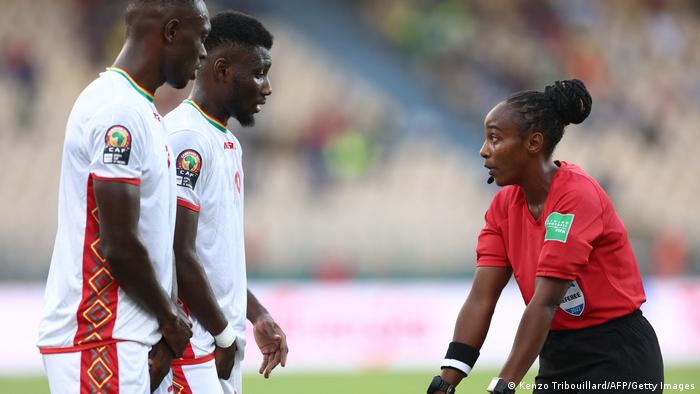 “Whenever my dream comes true, I have to shine”

Next stop: the men’s World Cup?

Could Mukansanga make it to the men’s World Cup in Qatar as an on-field referee?

“This is a big dream,” she admits. “Every male referee has that dream too because it’s their biggest competition.But my dream is not focused on the men’s World Cup. My dream is the Women’s World Cup [in Australia and New Zealand]. That is my first focus.

“And whenever my dream comes true, I have to shine.”