Another episode of The Wife aired this morning and fans weren’t delighted with what they witnessed when they tuned in. A once loveable couple became the subject of concern when the husband character beat his wife.

Mqhele, one of the Zulu brothers was bashed by viewers who first experienced him as a caring man towards Hlomu. They ripped him apart for being misleading when he was still courting her, only to abuse her in their marriage. What made matters worse, according to audiences, is that Mqhele was aware of Hlomu’s pregnancy before he physically assaulted her. Additionally, his unfazed stance after his mistreatment angered them further.

See some of the heated remarks netizens had regarding the villain’s actions below.

“I’m still traumatized by Mqhele’behaviouror. I can’t seem the get that scene off my head.”

“Mqhele is straight-up abusive. Nothing romantic about this marriage.”

In more stories about The Wife, Briefly News previously reported that Bonko Khoza went from being a commercial and cameo guy to being one of the best leading actors Mzansi has ever seen. 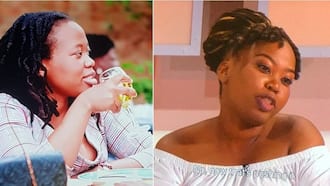 ‘Mnakwethu’ trends as viewers express shock over Samantha’s tricky pregnancy news: “Girl you sre on your own”

The celeb, who was introduced to Saffas as Mqhele Zulu, touched on everything it takes to play such an intense character, his biggest inspirations, his favourite part of being on The Wife as well as the most difficult scene he’s ever had to film.

Born and raised in the south of Johannesburg, 30-year-old Bonko Khoza says that he treated acting as a sideline hobby for the longest time. Bonko’s first love was never acting but he always found himself being pushed onto the stage.

The celeb studied fine arts at the National School of the Arts and had plans to become an illustrator before he finally gave himself over to performance. Bonko has always dreamt of playing a villainous character.