REV Dr AJ Varmah is on a mission of love for the next few weeks. He is seeking to help men and women have better, closer, more meaningful relationships. He wants to see more healthy, happy bonds that will lay the foundation for loving families for children; in turn, creating a more loving society and a better world for all.

He is starting with his own people. Born in Africa and raised in New York, Dr Varmah knows all too well that many people in the African Diaspora are yearning for a connection to their mother continent and are in need of a love injection. He is bringing the knowledge of the ancestors and the elders about love, passion and lasting relationships in a one-month world tour called “Africantic” – a play on the word ‘romantic’. 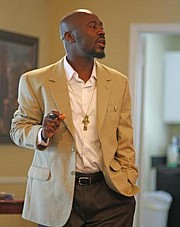 The Africantic tour starts from Feb 3-8, 2022. He is bringing African family principles just in time to share poignant wisdom to a nation that too often sees the degradation of the family through violent acts. Most recently, the country was rocked this weekend by the murder of a young mother.

These heinous acts that leave this nation reeling must be tackled from a myriad of angles. One way is by helping couples understand how to communicate effectively and how to respect one another.

Dr Varmah’s first topic is: “Let’s Talk Reality: Do you want a situationship, relationship, or family?” In this series – Love, Lies and Liberation from an African Perspective – he will guide participants on how to become more loving and have more fulfilling relationships. He will address the psychology of intimate relations and he will ask: “Are you building a partnership or increasing individuality?” He will touch other Caribbean countries, London and the Unites States before wrapping up the tour at the end of February. But followers won’t have to miss a beat as the entire series will be online. 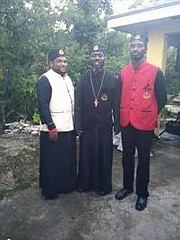 Audiences will learn to be aware of the energy they create in their relationships, especially the energy that is created within the bedroom.

Learning exactly what these energies are and how they should be utilized is a critical component to development that has been lost overtime and must be restored in order to create successful relationships, families, businesses, and generational wealth.

Dr Varmah is no stranger to this country: “I’ve been to the Bahamas over 10 times in the last 17 years. I’ve come to see and learn that the people of the Bahamas are not that different from the peoples of any other ‘me laninite’ lands in your desire to improve your life conditions, educate the next generation and gain an advantage both at home and on the world stage.” 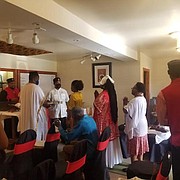 “As such I’ve always strived, when travelling to The Bahamas, to communicate in as clear and concise a manner, the importance of the Bahamian people fully aligning themselves with the rest of the Diaspora and those of the African continent in order to bring about some sort of global, unified success of African and Afro-Caribbean people. 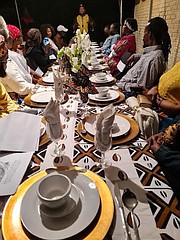 He has spent over 40 years studying and teaching all over the world with the aim of “re-awakening the awareness of self and the empowering of African descendants, so they can attain their rightful place in the world”. He has written over 80 books and has delivered hundreds of lectures in person and on-line, as well as countless interviews and radio presentations.

His purpose is to awaken all people of African descent to join in the liberation of his people globally “on all fronts including religion, economics, labour, sex, education, law, war, entertainment and politics”. 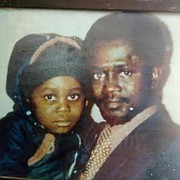 While in The Bahamas, Dr Varmah will connect with Kahun Anku Sa Ra, (Pastor Cleveland Eneas III) Pastor of the Qubtic Church of the Black Messiah. The church in The Bahamas is anchored in the Bain Town community and has more than 50 members strong. Members are a part of the global congregation of the Holy Qubtic Church with branches in Liberia, London, South Carolina, New England, Texas, California, Georgia, Trinidad and Tobago, and other parts of the world.

Dr Varmah is the Ba-Sesh: Haru-Hotep Tar – the head scribe and “Pope” of the Holy Qubtic Church. He is a Master Teacher in African history, African spirituality, world religious systems, world mythology, and scripture, namely: the Torah, the Holy Bible, the Holy Quran and others. Dr Varmah, Ba-Sesh: Haru-Hotep Tar, speaks five languages, including Hebrew, Arabic and the ancient Tama-Rean language.

Born in Liberia, West Africa in the early 1970s, Dr Varmah is from the lineage of a Basa mother and Mandingo father. At the time, Libera and many other African nations were going through the process of removing colonialism. At the age of 3, he was taken by his mother to New York City, where he was raised with his two siblings.

In his elementary school years, he attended St Raymond’s Elementary School. He went on to Brooklyn Technical High School.

“My mother always made my siblings and I do book reports about various Pan African, historical and civil rights leaders, which we had to type on her old typewriter,” he recalls.

“She, though struggling, did all in her power to provide us with a private school education in order that our basic foundation in the subjects of reading, writing, mathematics, history and science would be refined. My mother also stressed the importance of Pan Africanism to us.”

In addition to scholastics, the young AJ played baseball, basketball, American football and judo, which kept him disciplined and engaged.

It helped him to avoid getting caught up with the wrong company on the streets of New York.

From the age of 12, he would go to a Nubian Hebrew community in New York City, where he was taught Arabic and Hebrew for nearly 20 years.

Eventually, he successfully pursued undergraduate and graduate studies in biology and pre-med at the SUNY Binghamton with a minor in music. Later, he earned a PhD in Theology and Religion from University of Alabama at Birmingham (UAB).

Each step of the way, he sees that his path was preparing him to lead thousands of people in raising their spirituality and consciousness.

His path, now, is to educate and inspire others so that the torch can be lit all around the world – one that empowers people with an Atonist view (‘at one’ with the Divine Creator).

“My black consciousness and perpetual interest in it is directly due to my mother, who spent many a Saturday taking us to the Museum of Natural History as well as the Schomburg library in Harlem,” Dr Varmah told me.

“I was introduced to the speeches, works and writings of the likes of Frantz Fanon, Marcus Garvey, Elijah Muhammad, the Mandelas, Castro, and countless others.”

“As it pertains to the Divine, I was taught from young that we black people… better yet African people, have always had our own understanding and relationship to the Divine – not as pagans but instead, as the progenitors of all spirituality inclusive of so-called monotheistic teachings.”

He is encouraged by the increase in Diasporans who want to learn and understand their spiritual, cultural and even biological connections to Africa. In this Love, Lies and Liberation series, he will touch on a critical aspect of love that connects to so many other areas of being African. The event will take place for four weekends within February during the period of love, namely “Valentines day”.

February is said to be a time of love and romance, however so many unhappy couples and singles are not being fulfilled within their present and past relationships, and are subjected to many heart aches and disappointment.

“This event aims to shift the dynamics of Africanktic (Romantic) relationships, by approaching it from a conscious perspective. We feel the dire need to address this topic not only to harmonize individual relationships and households but to liberate all Nubians globally. With a liberated mind set, we can join forces with one another and change the various circumstances we find ourselves in today.”

“I fully recognize and believe that though there has been a shift toward greater consciousness and spiritual awakening,” Dr Varmah said.

“There are those who are working both covertly and overtly to prevent this from reaching its fullest. And it is with this in mind that I dedicate my works and efforts to reach as many conscientious and conscious people as possible.”