The South African entertainment industry has seen its fair share of friends turning on each other, be it for the reason of a new relationship or friendship. It is no secret that it is a cutthroat industry and as life would have it – what you do to others, will be done unto you.

Now at the centre of this topic are South African rappers Nadia Nakai and AKA. After months of speculation on social media, the pair confirmed their relationship in March

Some time ago, AKA took to Instagram to post the two of them booed up, where Nadia is seen sitting on AKA’s lap, making their relationship publicly official. The Instagram post didn’t only confirm the dating rumours but also showed their connection as it was a short GIF of them kissing at Orthodox VIP Lounge.

In the early hours of the morning AKA, posted another snap of them booed up in Accra, Ghana, and captioned it:

The post caused a stir as Mzansi had mixed reactions about the pair, others were supportive and others not so much, with @tanaka._._ saying:

“The way you get up on your feet and love again really inspires me the most. Megathon. Megacy.” 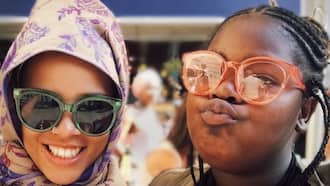 Others were not feeling the couple as much with @strapstar_ saying:

Another user brought up the fact that AKA still posts his late girlfriend Anele “Nellie” Tembe, @wonder_mabele said:

“But you can’t be posting Nelli while seeing Nadia. And I’m saying this out of love and respect.”

“This will end in tears, lol!”

In related news, Briefly News reported that media personality and AKA’s ex-girlfriend Bonang Matheba has unfollowed Nadia Nakai. Bonang and Nadia were close prior to AKA and Nadia confirming their relationship. Peeps took to social media to debate about whether or not it is okay to date your friend’s ex. As girl code states, it isn’t, but that’s not what everyone on social media said. 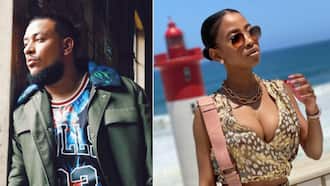 AKA mourns anniversary of fiancée, Anele’s passing, SA not impressed after he flaunts new relationship

Bonang and AKA dated from 2015 to 2017. At the time, AKA was also dating DJ Zinhle, who was pregnant with their daughter Kairo. DJ Zinhle fans attacked Bonang, calling her a homewrecker and a bad friend since she and Zinhle had been friends.

During the debate on social media about dating your friend’s ex, some said it was okay as Bonang did the same thing to DJ Zinhle, and now karma was catching up to her with Nadia dating AKA.